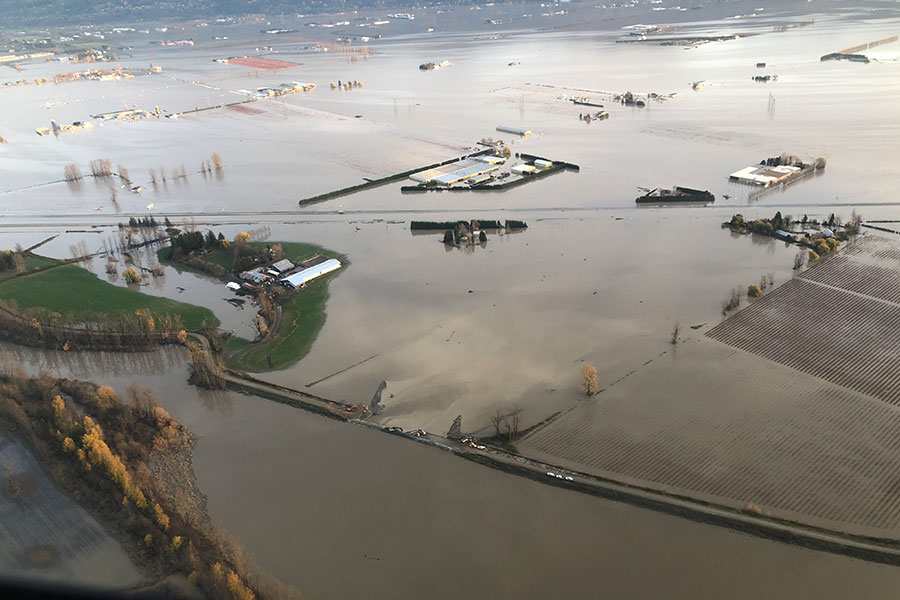 Three months on from the Atmospheric River of mid-November, as I watch various communities work to recover from the extensive flood damages, I see things that bring me hope, but I’m also watching us repeat the mistakes of the past and dig in our heels. I wish we were not.

Post-disaster there is an understandable desire to “return to normal” and to do this as fast as possible. But, what if normal isn’t going to cut it anymore. In fact, we know because the risk was realized in November, normal is going to land us back under water.

We hear the mantra “build back better” (BBB) coming out of our decision-makers’ and colleagues’ mouths. But, arguably building back, better or bigger, makes the somewhat arrogant assumption that the best and only solutions are engineered and that doing the same thing again, however more robustly, makes sense. We made this same choice, dare I say mistake, back in 1949, when in the wake of the 1948 Fraser River flood and consequent damages, the government supported an initiative to “restore the public faith in the diking system”, quickly laying out and developing design specifications for some 600 kms of dike in the Fraser Valley. The goal was perhaps not the right one, the goal wasn’t to reduce risk, but to dig in our heels and build back, and build back fast. In fact, so fast that “empirical decisions, based only on judgement and experience, had to replace the usual tedious surveys and calculations”. The decisions made in 1949 largely frame how we manage flood risk in BC and Canada today. We don’t need to keep on going down this path, there’s a whole toolbox of gentler options that could be employed to reduce risk.

Further, the BBB concept, at least as it is currently being employed, assumes that our human needs outweigh the needs of our environment (which, of course, are really human needs too). Building up dikes and armouring rivers with rock (rip-rap) damages riparian habitat. The Fraser Valley diking system has caused unfathomable damage to the salmon population. The damages associated with the immense volumes of rock thrown into our river systems in November and December (400,000 cubic metres on the Coquihalla alone), will not be known for a while yet, but will surely not be good. Again, as above, there are alternate flood mitigation solutions that have less negative consequences for the environment, and in some cases even net benefits. But, because we are comfortable in our entrenched pathway of engineered solutions, these alternatives face the obstacle of being ‘too novel’, ‘too hard to implement’ and ‘too hard to understand’.

Finally, anecdotally, the fast pace of the “emergency works” and recovery activities means that legislation requiring that First Nations of BC are meaningfully engaged in decisions within their Territories is being ignored. On the bright side, this is perhaps not quite as egregious as the cost-benefit analyses that were used in 1949 to determine the alignment of dike infrastructure. These ascribed no value to reserve lands, and so the dikes go around them – nominally protecting the neighbouring settler communities, and making conditions worse on reserve.

I’ve presented some of the parallels between the emergency response phase of the 1948 flood and November of last year to engineering, insurance sector, and other colleagues (see above). Each time, I’ve heard feedback along the lines that ‘I had no idea/I never knew this/etc.’. I’ve also heard – ‘let’s do this better’. And, I really believe we can.

So, what gives me hope? It’s the story that is not being told in this article. The Province, in this case, is doing its job. They are saying – hold on, is this (dumping a bunch of rock in the river) the best solution? It certainly isn’t the only solution. I also gain hope from my colleagues inside and outside government who are pushing to ensure that environmental regulations and DRIPA are not thrown out just because we are in a State of Emergency. We need to make decisions that will support long-term risk reduction and increased resiliency, and in some cases, this is happening. Hurrah.